The love story of Anna and Grayson began in Washington, DC in 2009. During Freshman Week at Howard University, they were in line at a night club and Grayson was playing matchmaker for his friend.  Anna was not interested in his friend but, she did notice Grayson. The two would run into each other again a few months later, while traveling home for Thanksgiving. While at the ticket counter, their eyes met, and they instantly recognized each other from campus. They switched seats on the airplane and chatted the entire flight.

The evening before graduation, the pair found themselves on the dance floor of the same night club where they met initially. The timing was not right for either of them, but they agreed that there was no telling what the future may bring.

A couple of years later, Grayson commented on one of Anna's Instagram posts and left his number. They were both single at this time and Grayson was traveling to DC soon. They had their first date that weekend and it certainly would not be the last. After a year, the couple decided to relocate to Los Angeles together and spent the next five years travelling, making memories together, and even introduced two wonderful pups into their family.

Set in downtown Los Angeles, this photo shoot truly captures Anna and Grayson's love, and the architecture and atmosphere of the city. Check out their gorgeous engagement photos taken by Melanie Hunley Photography.

Grayson and Anna were visiting a new French restaurant that Anna had been wanting to try for some time. When they arrived at the restaurant, they were immediately seated and handed menus, but no one came to their table after that. Anna mentioned to Grayson how weird it was that no one had brought them water yet. Shortly after, they were served champagne and Anna was even more confused by the unusual service . As she tried to figure out what was happening, Grayson asked Anna to put down her menu and told her that he had a surprise. He got down on one knee and proposed while a friend was hiding at the bar filming the entire thing!

It is very hard to surprise Anna since she is always planning everything. Once I got the ring, I was worried she would find it and I kept moving it every day. I knew I needed to give her the ring soon, but I couldn't figure out how to surprise her. I made it seem like a regular date night and called the restaurant to coordinate the surprise with them. Anna, being the planner she is, almost ruined the surprise by connecting with someone she knew at the restaurant prior to our dinner. Luckily, everyone at the restaurant kept their lips sealed! The day before I was planning to propose I asked Anna's close friends to hide at the bar to film the engagement and enjoy us for a rooftop celebration after. Initially, I planned to propose at the end of dinner, but I decided I could not wait and did it in the beginning! Anna was so surprised and it turned out better than I imagined! 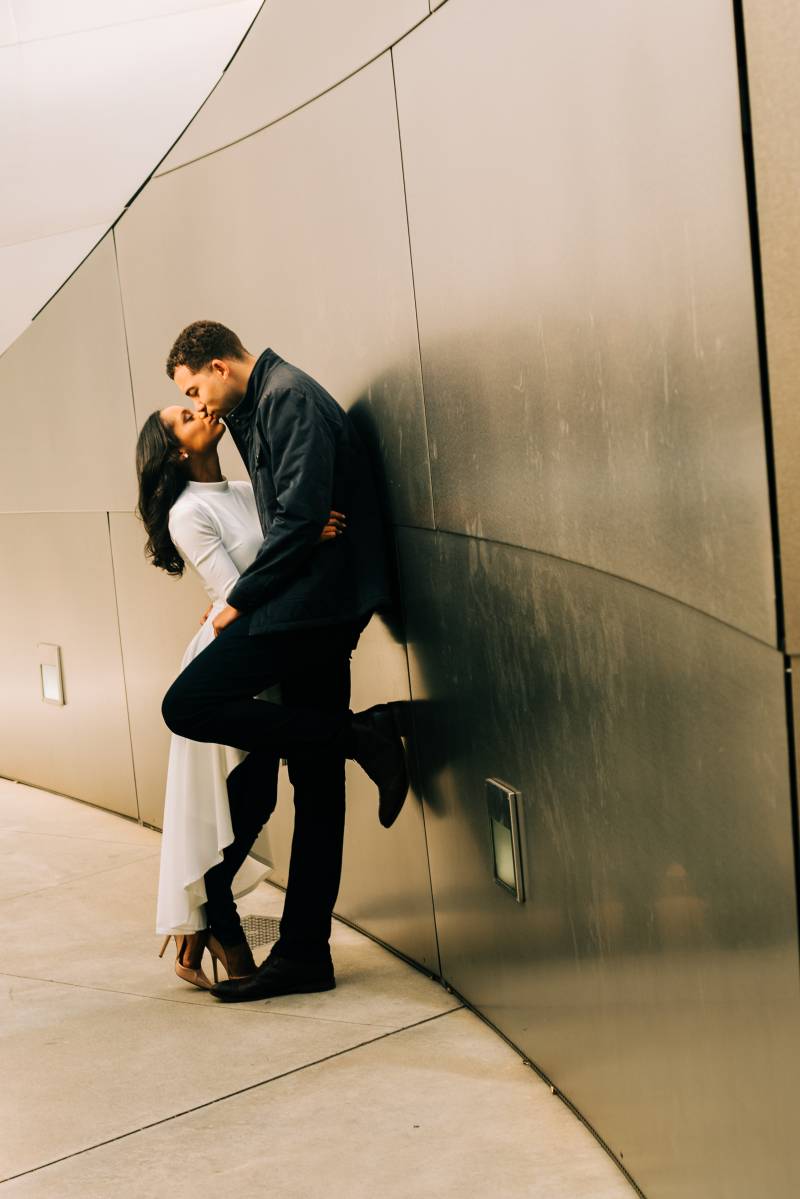 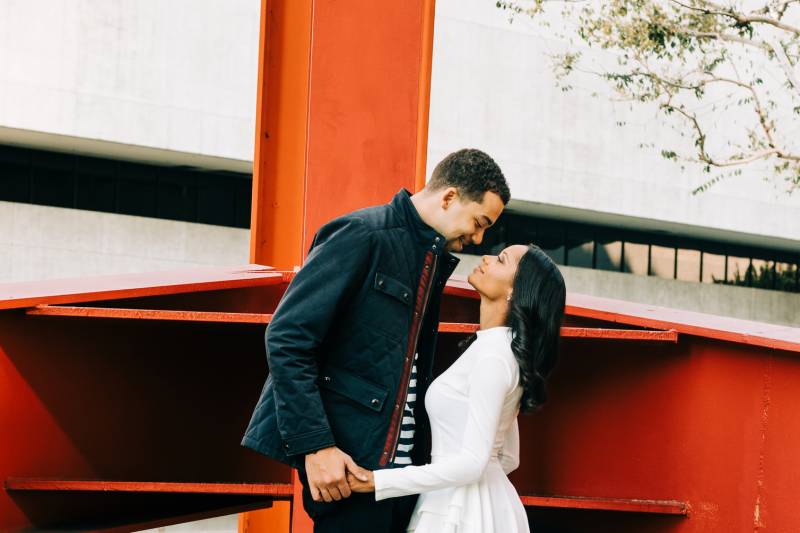 The paths Grayson and I traveled to reach this point in our lives, where we are in love with each other and are getting married is what makes our love so special. We are committed to growing as individuals and as a unit. 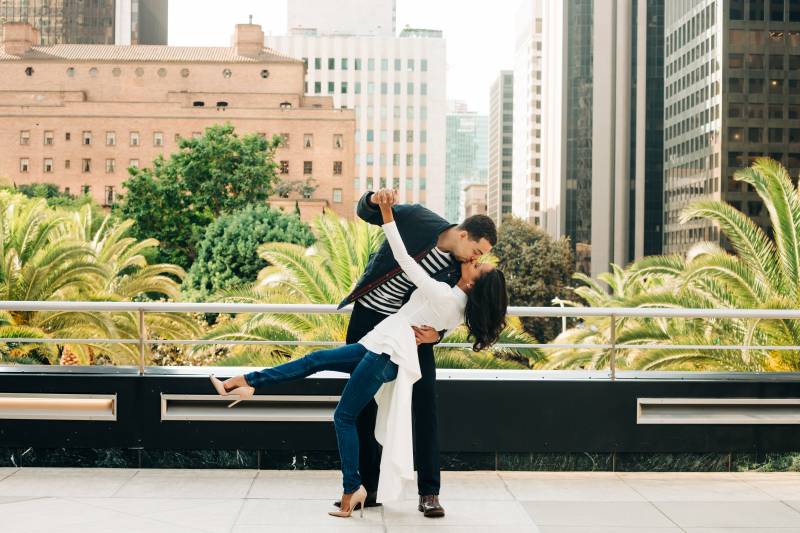 This was actually our second engagement shoot! The first one we did was in Venice, Italy. It was absolutely breathtaking but due to all the traveling and our attire, we were a little less relaxed than I had hoped! When we got the opportunity to do another engagement shoot in our neighborhood of Downtown Los Angeles, I knew this was going to be the perfect opportunity for us to really have fun this time! We got to shoot in comfortable clothes at some of our favorite spots within walking distance from our house.

Our photographer let us choose our shoot locations since we were so familiar with the area. I was a bit overly ambitious and planned an uphill walk from Maguire Gardens to Disney Concert Hall in heels. And once we got there is what like standing is a hall of mirrors in direct sunlight. We definitely worked up a sweat! 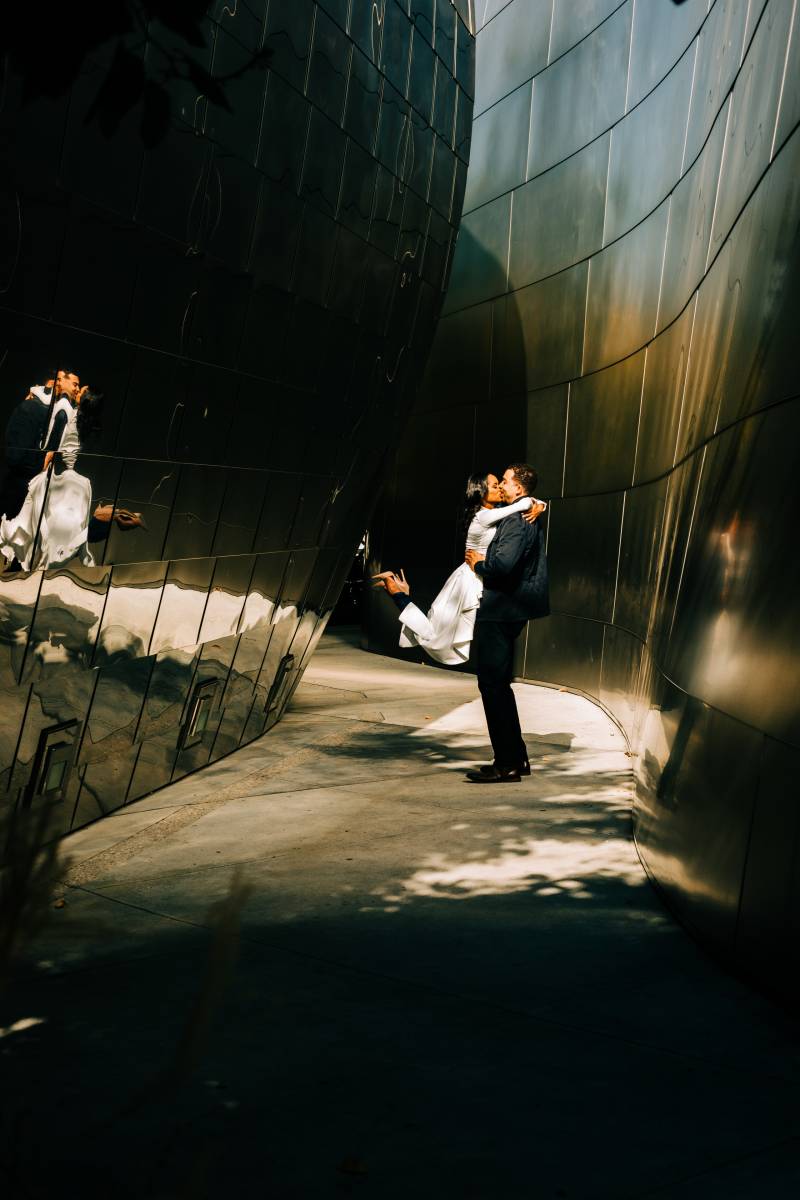 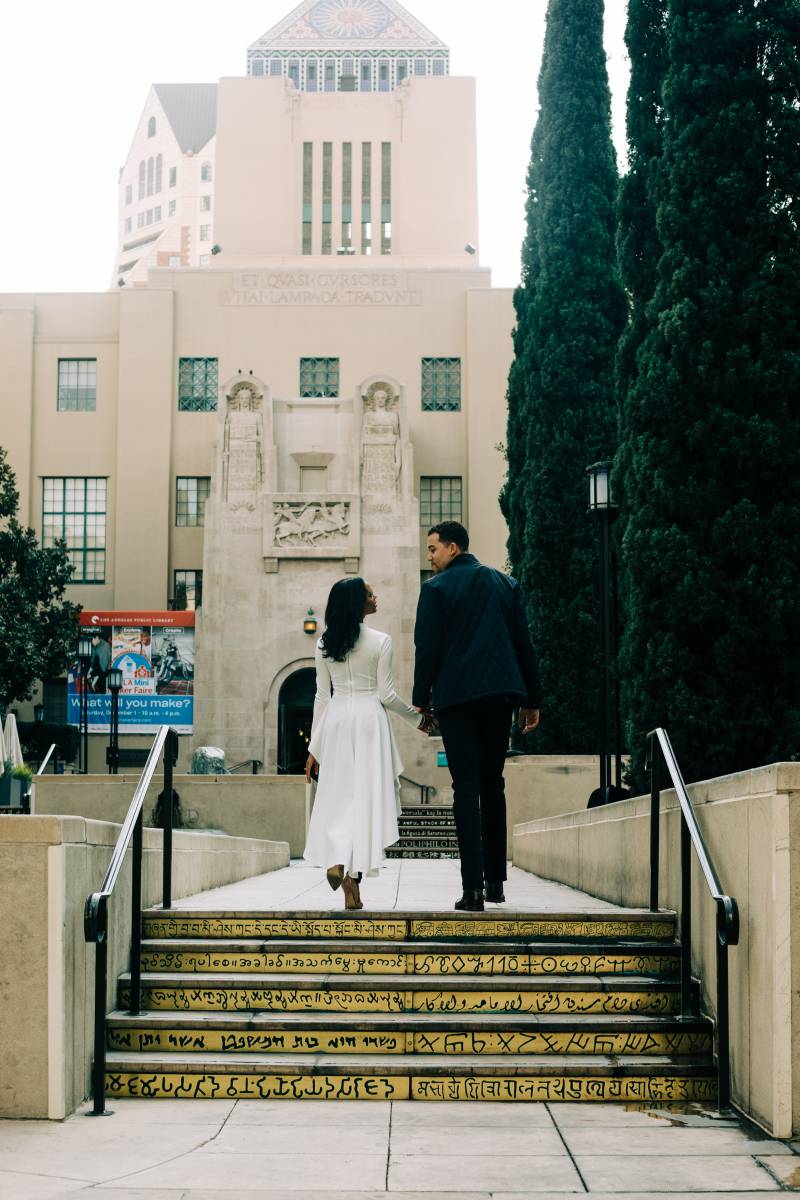 We are really looking forward to seeing each other for the first time on our wedding day!

Yes! We were lucky enough to celebrate our wedding in September of 2019.

Congratulations to the happy couple!  We wish you many years of wedded bliss!