A key component to wedding planning is finding the right bridal squad to help make your big day come to life. In each part of my journey, I've been lucky enough to create lifelong relationships with some phenomenal women. So when I said, "Yes," to my fiance's proposal, I immediately had a list of six women that I knew had to be in my bridal party.

All of my friendships are equally dear to my heart, so selecting a maid of honor was hard. I decided that this role should go to the person that I knew the longest, my big sister Ashley. She is patient and she's incredibly passionate about everything that she does. So, I knew giving her this role would be fitting. As my older sister, she's helped to diffuse uncomfortable situations for me while always keeping my best interest at heart. 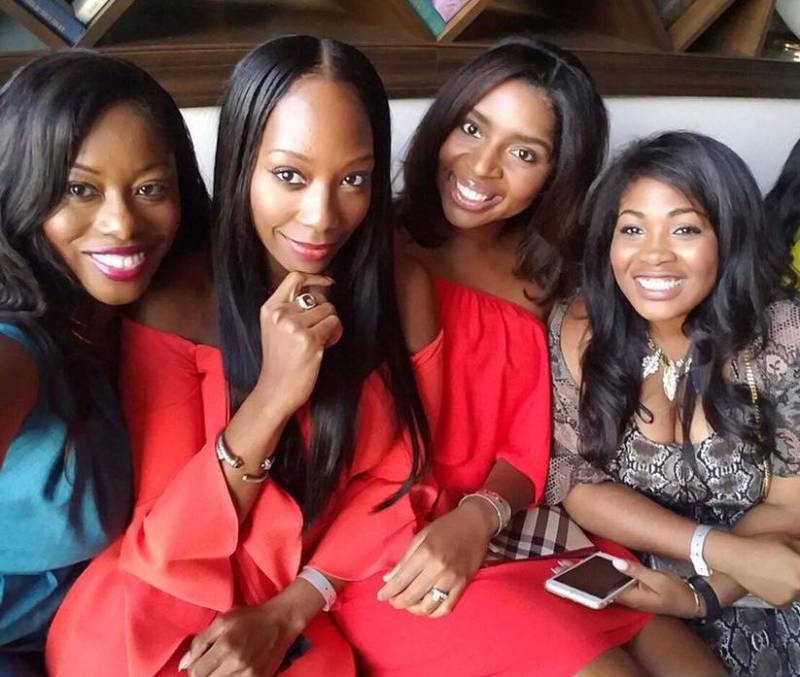 During my first day of college, I was a bit nervous making new friends. Nsenga and I had two classes together and by luck, we ended up in the same dorm. We were destined to become friends. and Nsenga was often times my voice and confidante while in school. As a full-time mom and an amazing attorney, she continues to wear her heart on her sleeve. She is my best friend and is my bridesmaid number one.

I met Kerrian through Nsenga while in college. Kerrian was one of my first friends to ever challenge me and not allow me to get my way (my issue being the baby girl of the family). I, along with several of my friends, respect Kerrian to the highest degree. She is loving and honest. I consider Kerrian my honorary big-sister and have always been able to rely on her advice. She's my bridesmaid number two.

I always wished for a little sister and I received one in college. I met Sandra during her college tour at Dickinson and we immediately became friends. The way she tells the story, I took her under my wing, but little does she know, she took me under hers. Sandra is scrappy and resourceful. She helped me to find those traits within myself. She is wise beyond her years and is a true friend. She is my bridesmaid number three.

While in undergrad, I had the epiphany that I wanted to pursue a creative career path and enrolled in a fashion design program at Drexel University for my master's degree. To anyone who thinks fashion school is easy, let me tell you, it is not! I was pushed and challenged in ways that I've never experienced. I was blessed to meet an amazing and talented design student in my same year. Her name is Mika. She came off shy and unwilling to make new friends, which was much similar to my approach with Nsenga. But, I insisted on developing a strong relationship with her. We eventually became inseparable and helped one another emotionally through design school. Mika has a heart of gold and is one of the most creative people that I've met, thus making her my bridesmaid number four.

When I met my fiance, he told me about his closest and dearest female friend, Tasha. All of Courtney's friends possess similar traits. They're loving, caring, and sincere. When I said, "Yes," to Courtney, I said yes to a new sister! From day one, Tasha has embraced me and made me feel welcomed within their circle of friends. It was only right to make her my bridesmaid number five.

So, with my list of six complete, I had to find a fun way to invite them all to be in my bridal party. At the time, Ashley and Kerrian were both living in Italy, and everyone else was living in different cities, which led me to find a really cool company called Greetabl.

This company allows you to upload images and select candy or confetti to be placed into the box. They are able to save the images and hang them up. I created a Greetabl with a special message for each lady and invited them to the Joffie-Richards Bridal Squad. They all said yes and were delighted when they received their boxes.

It is exactly a year away from my wedding. My next step will be securing my beauty and creative services squad for the wedding. Stay tuned for these next fun steps in my wedding journey!

How did you welcome your bridesmaids into the bridal squad? Let us know in the comments below!

Prev4 Different Ways You Can Arrange Your Fi...
NextI Do... Take You As My Wedding Planner