Elaine and Eric knew of each other through their mutual friends. For years, they did not actually meet each other. That all changed in 2015 when a friend introduced theirs formally introduced them. Elaine thought their friend and Eric were going to join her for dinner, but Eric, intentionally, was the only one who showed up. So, it didn't occur to her that they were on their first date until about 45 minutes in! They went to dinner and lunch a few more times that year, but Elaine was busy and didn't have a lot of time available for them to get to really get to know each other. They went on a date at the end of 2015 and have been together since. Check out their gorgeous garden wedding in Fayetteville, North Carolina, captured by Lisa Whitmore of ShoMore Photography.

Honeymoon Destination: No honeymoon yet. Waiting on the right time to take a break from work. 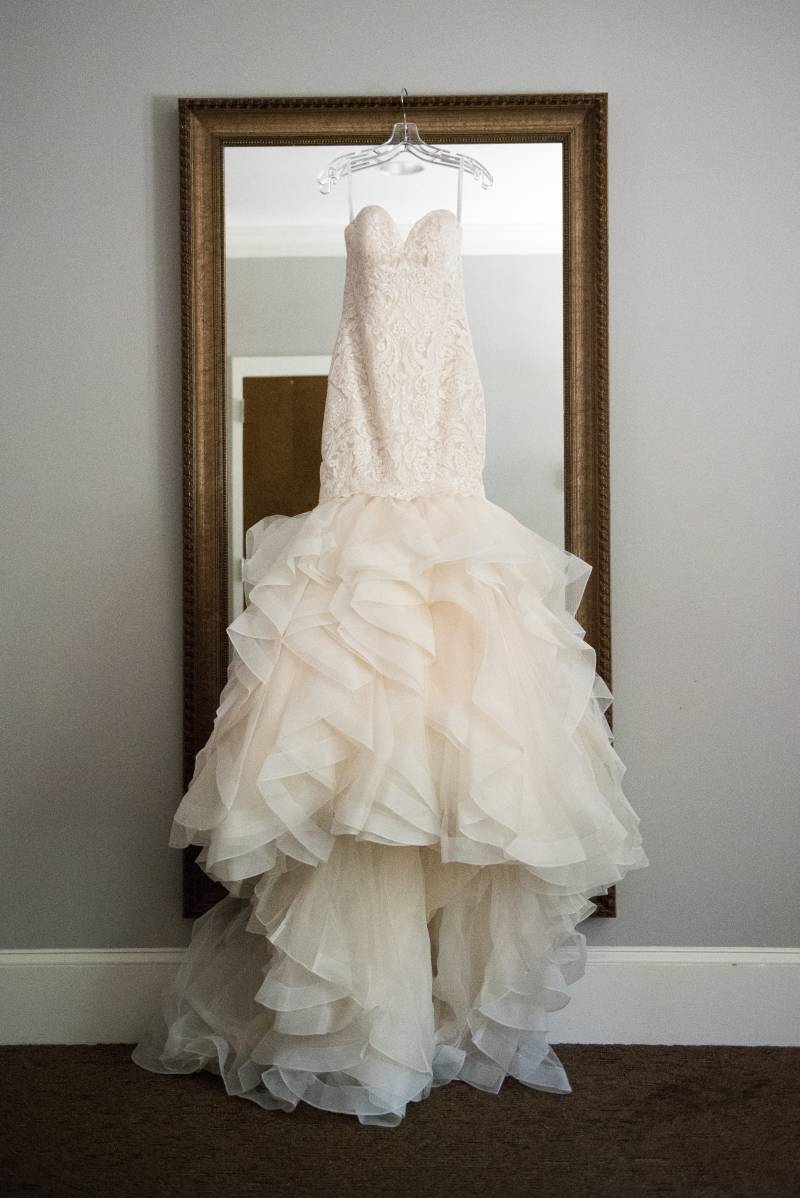 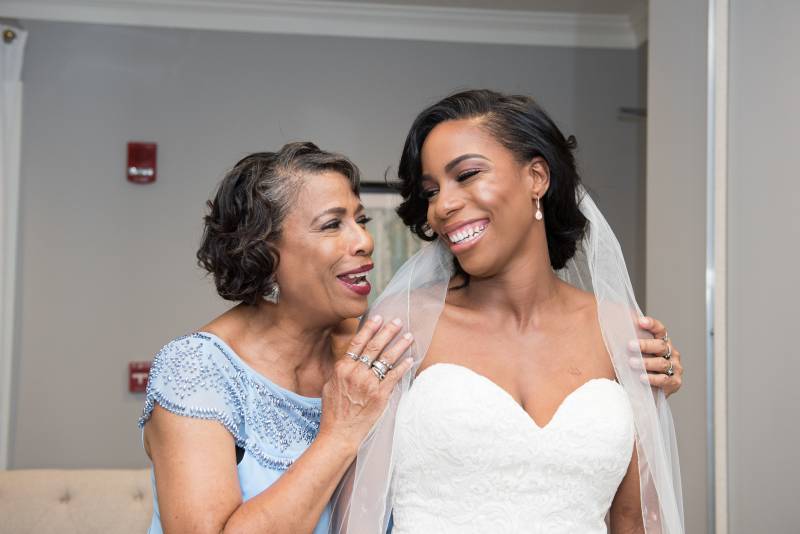 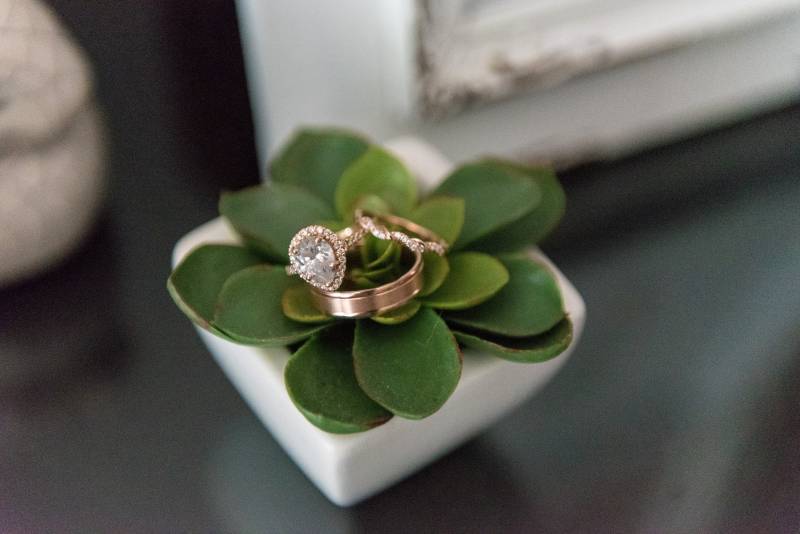 After meeting through a mutual friend, Eric and I dated for almost a year a half before we took our first international trip together to Italy. That previous summer, we were planning to go to Jamaica together, but we both suddenly became unemployed. Nothing brings you closer together than overcoming adversity. Our trip to Italy was a celebration of our new jobs and really just enjoying time with each other. The plan was to visit Rome for Easter Mass at the Vatican. After arriving in Rome and checking into the hotel, I took a nap while Eric went to get our tickets for the mass. I woke up around 5 p.m. and found Eric lying next to me, telling me how much he loved me and how excited he was to be with me.

At that moment I kept thinking: One, this is really happening, and two, this is really happening with my hair wrapped up! I couldn't get past the fact that I looked the way I did. As Eric continued to confess his love, he reached into his pocket and pulled out a rosary. My face immediately fell, and he knew he had me fooled. He probably laughed for almost 10 minutes then explained that he got me the rosary while he was out since I said I could not find mine. Irritated, I got dressed for our dinner reservation at the restaurant Mirabelle, which overlooked the city.

Somehow we decided a 7-course meal at7:30 p.m. was a good idea after seven hours on a plane. Because I am a control freak, I picked this restaurant for the ambiance in case Eric proposed. The restaurant was stunning! It overlooked Rome just as the city began to light up while the sun set. The whole back side of the restaurant was glass. After the fourth course, Eric left to go to the restroom. I quickly patted down his jacket. Surely the ring would be in there if he was going to propose. No ring. I knew I didn't see a bulge anywhere on him when he got up.

I figured I jumped the gun and this night would just be dinner and nothing else. The next four minutes went by super-fast. Eric came back to the table and within a minute or so he proposed! The ring was in his pants pocket. I think I said, "Yes," to the ring first, then yes to him since it was love at first sight with my engagement ring! A large table of Chinese tourists realized what was going on and one by one they started to give us the thumbs up sign to celebrate. 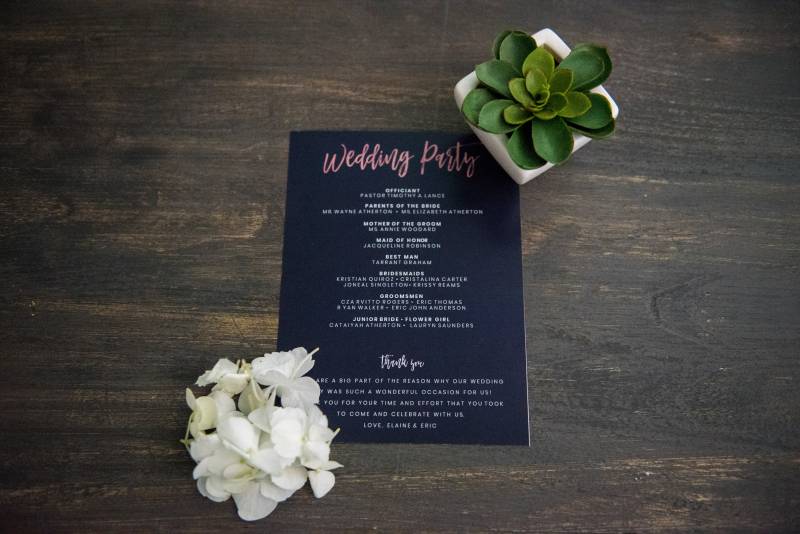 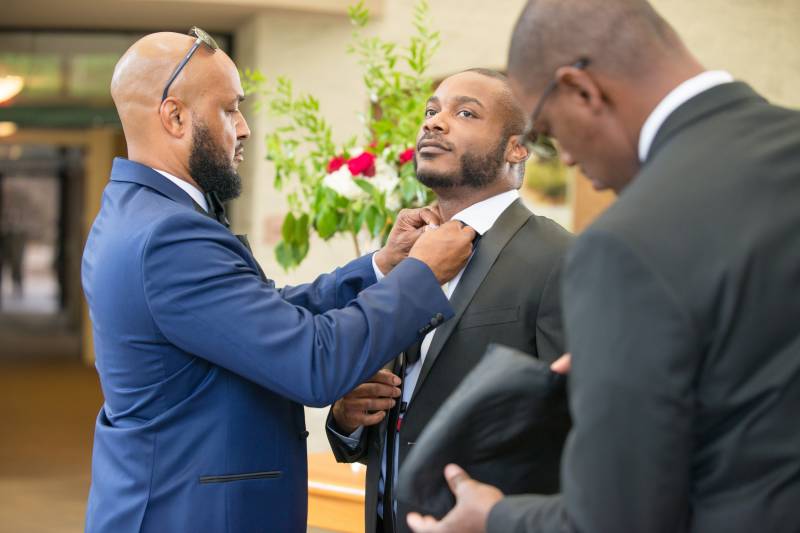 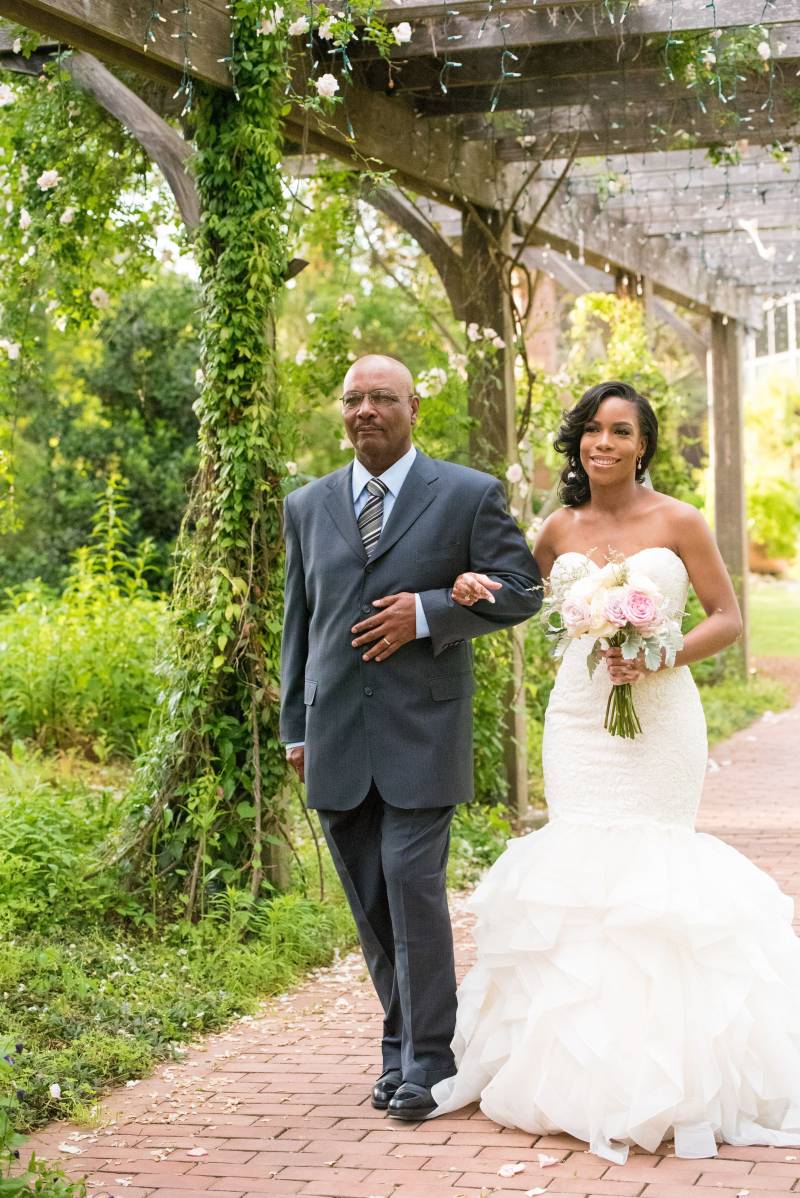 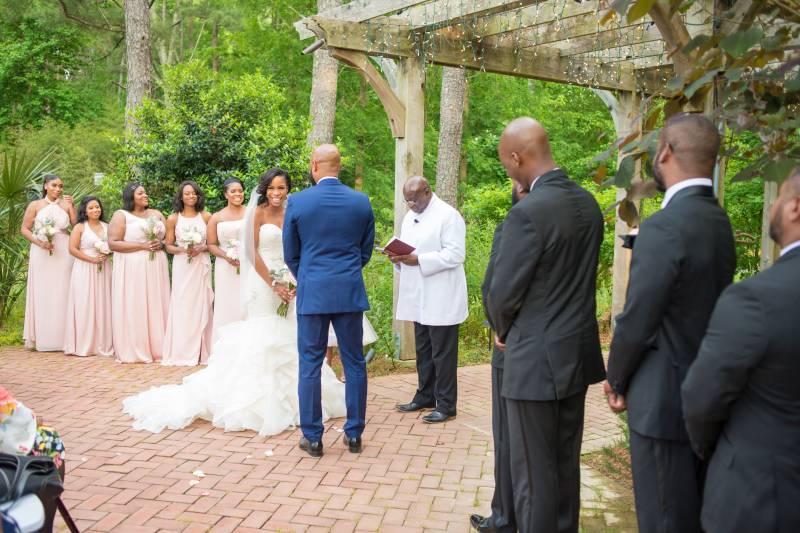 I didn't have a wedding planner, so I can truly say that made the last 45 days leading up to the wedding felt overwhelming. I wasn't sure how the big day was going to go because my head was swimming from last minute preparations. All of that went away once I saw all of our family from near and far together. Our wedding was full of family, and that truly made it beautiful. We are a blended family with three kids between the two of us. Seeing our children laugh in the photobooth and dance together was amazing.

Our extended family also lives mainly out of state and out of the country. My mother's family from Trinidad came to visit, as did my dad's family who are all originally from Jamaica. Seeing people who have been connected through relation to me all my life finally meet in person to celebrate Eric and I was truly magical. I smiled the entire day.

I wasn't nervous about the wedding. Elaine and I joke that it feels like we have always been married. I was happy to see it all come together so beautifully and how much fun we all had. Family and friends I haven't seen in years were all so positive and happy. Everyone got along really well and made us feel loved. 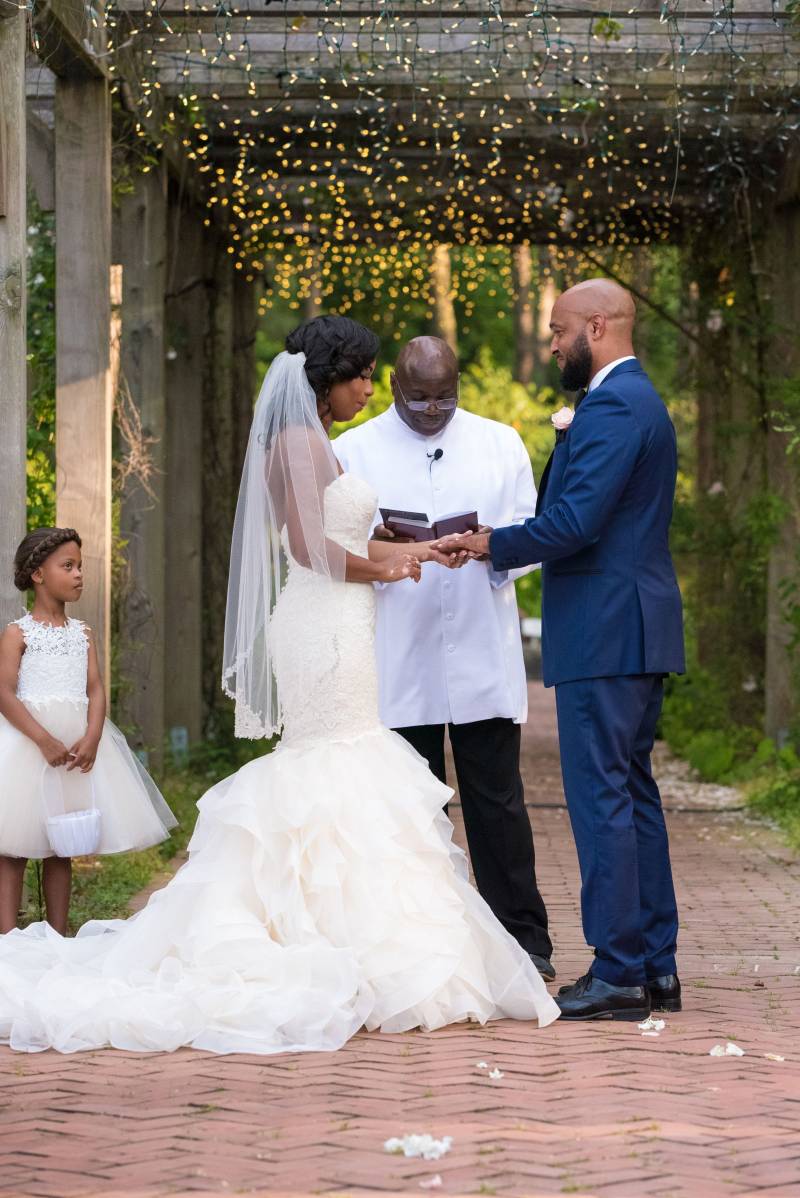 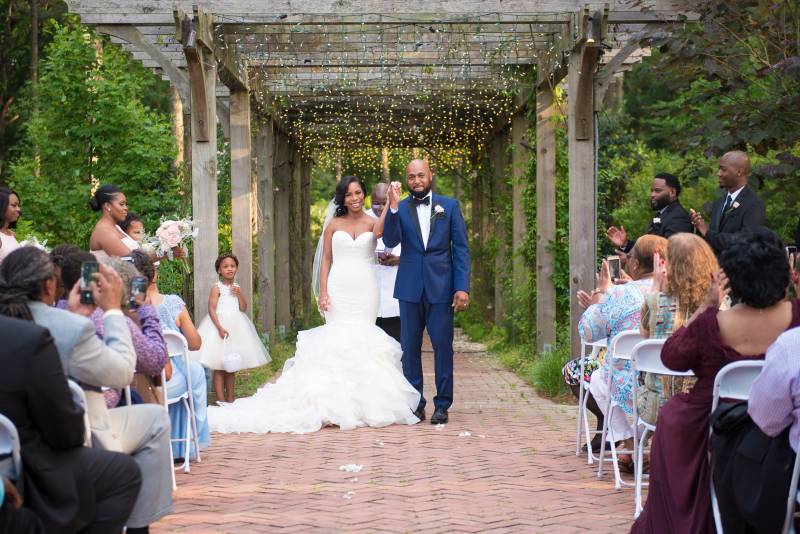 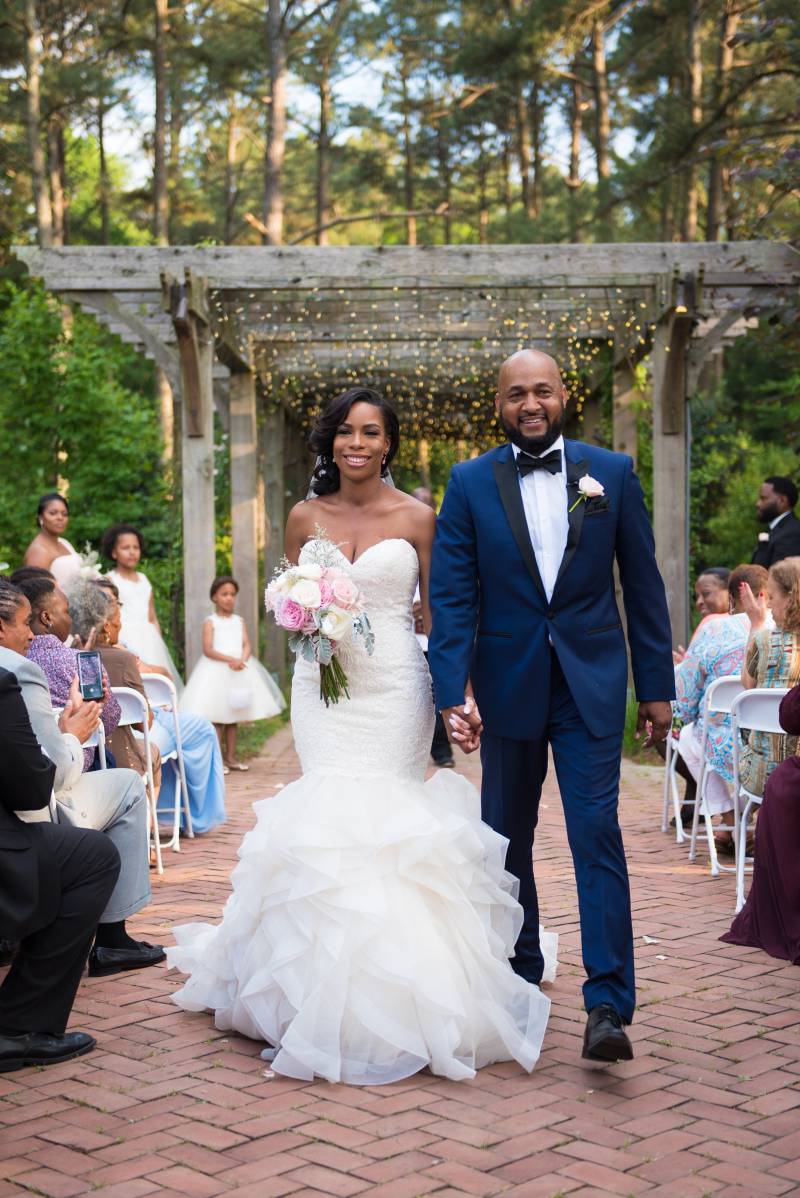 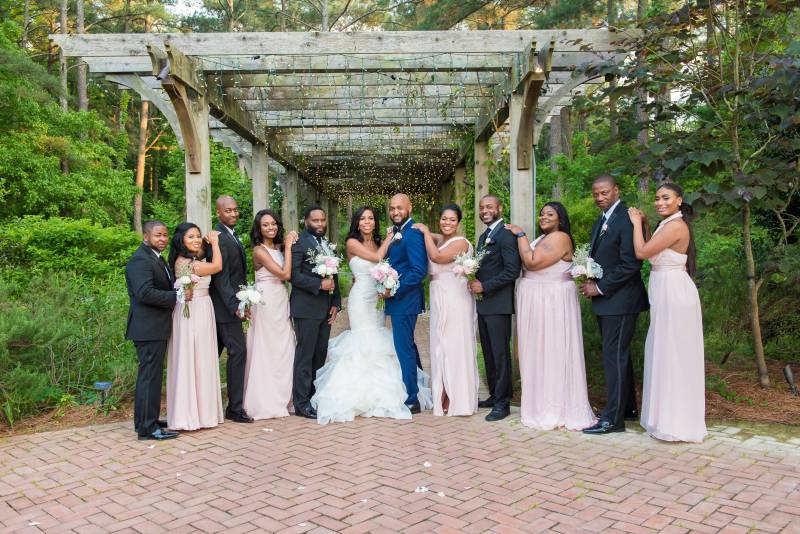 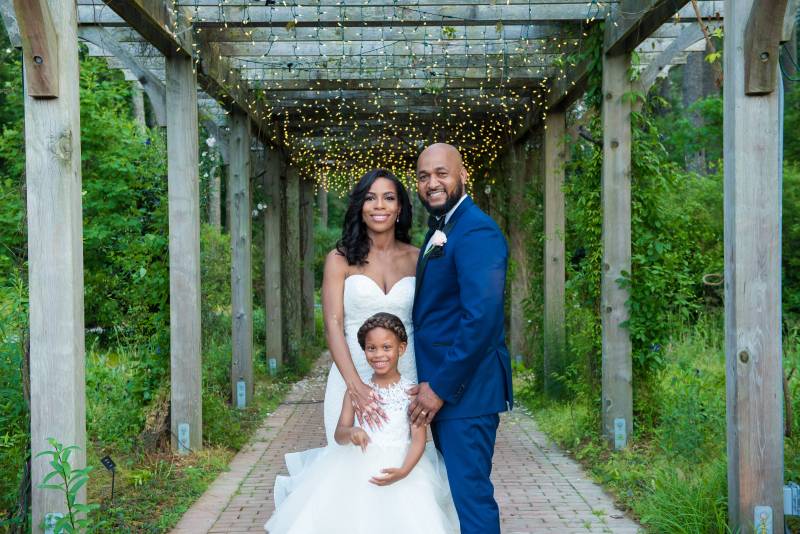 When we started dating, we both already knew we would probably get married. We dated with that intention because we both knew we saw a lifetime in each other. Remembering that puts things in perspective so we don't sweat the small stuff.

Your most memorable moment:

Dancing with Eric and then my dad. I call Eric "Dance Fever" because he is always dancing, but we never danced together before our wedding. That made our first dance special. I also danced with my dad and he showed off moves I had never seen in my life! He definitely upstaged me. 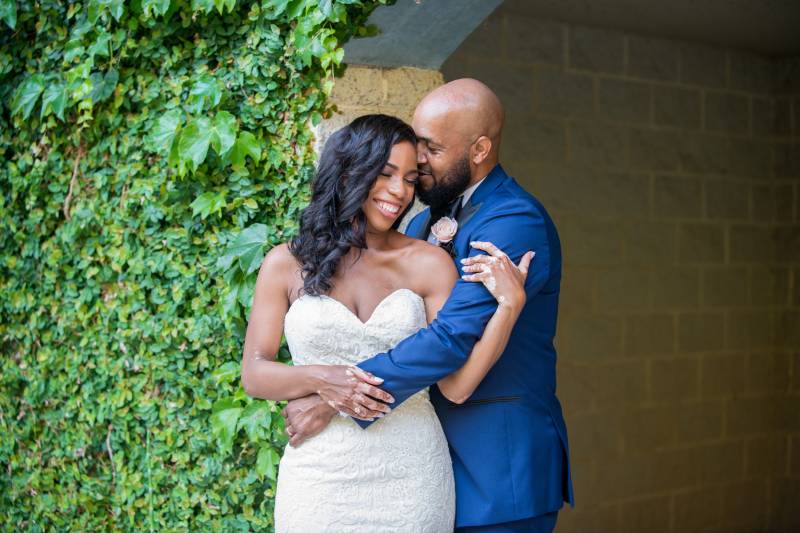 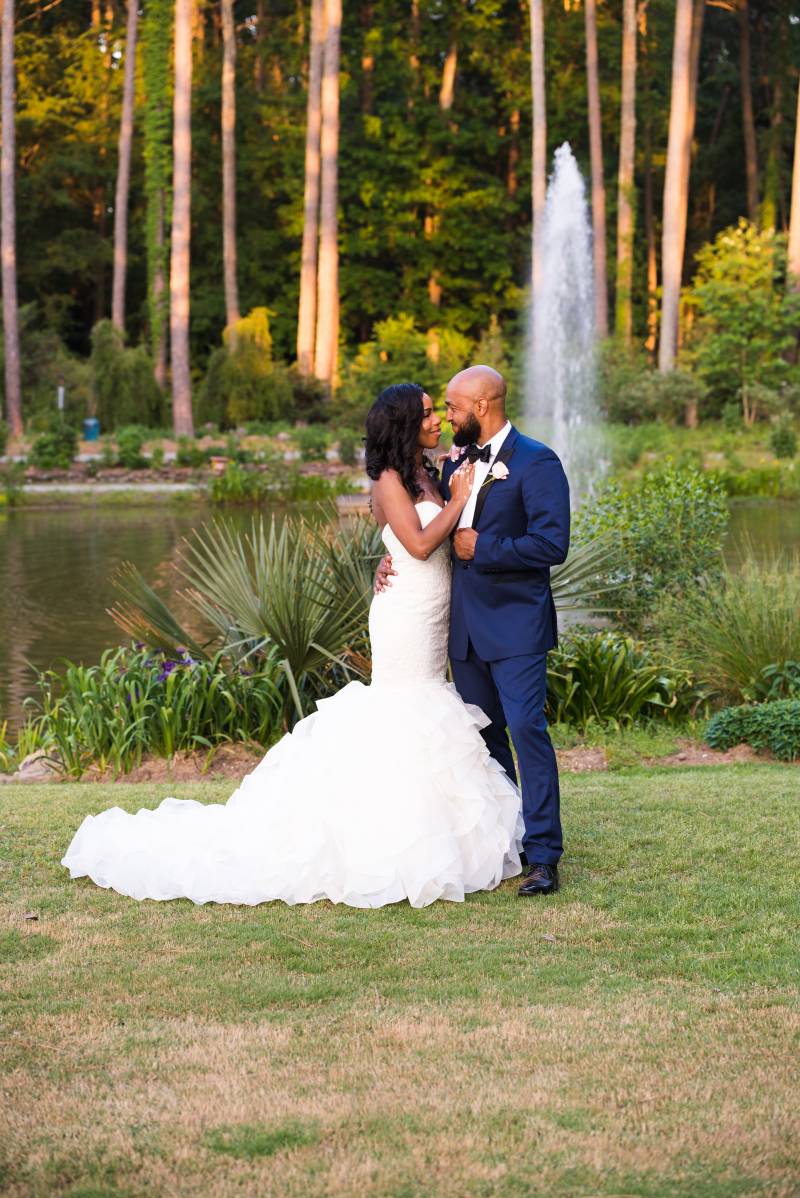 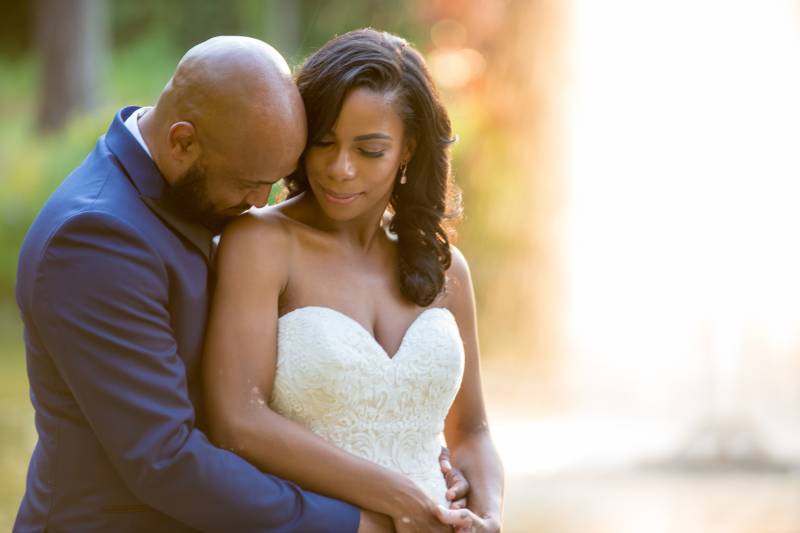 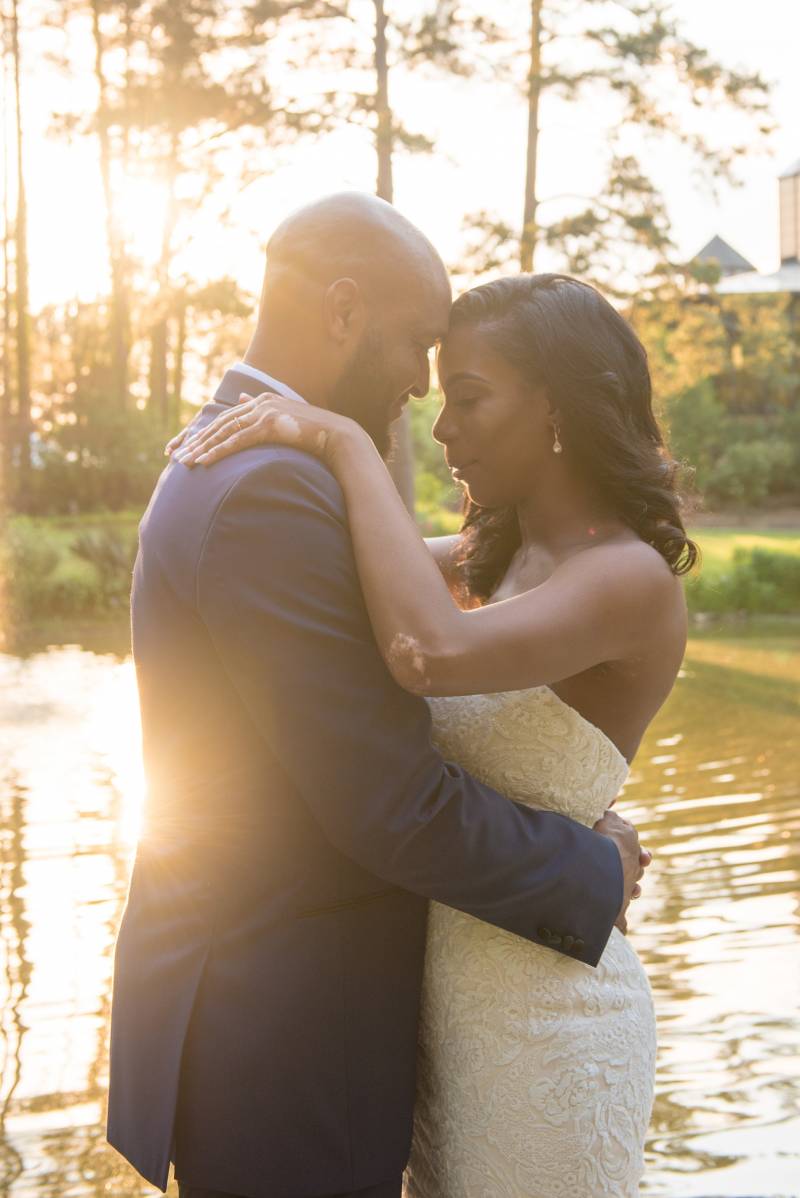 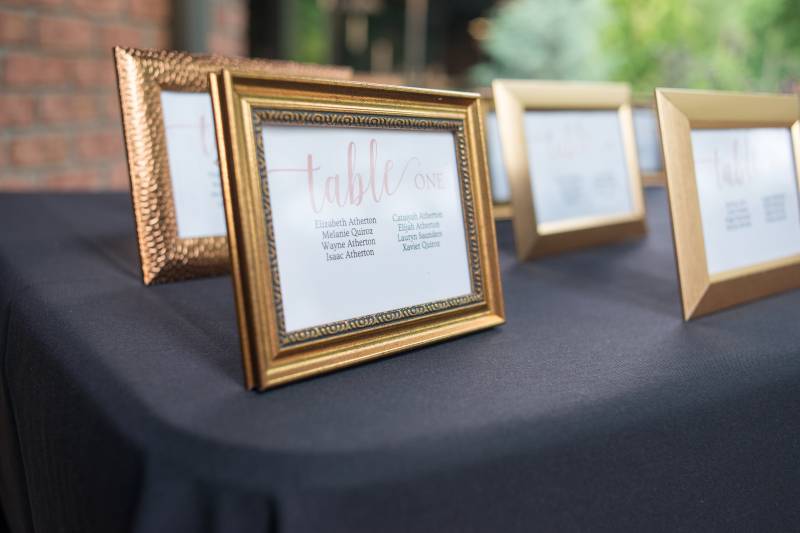 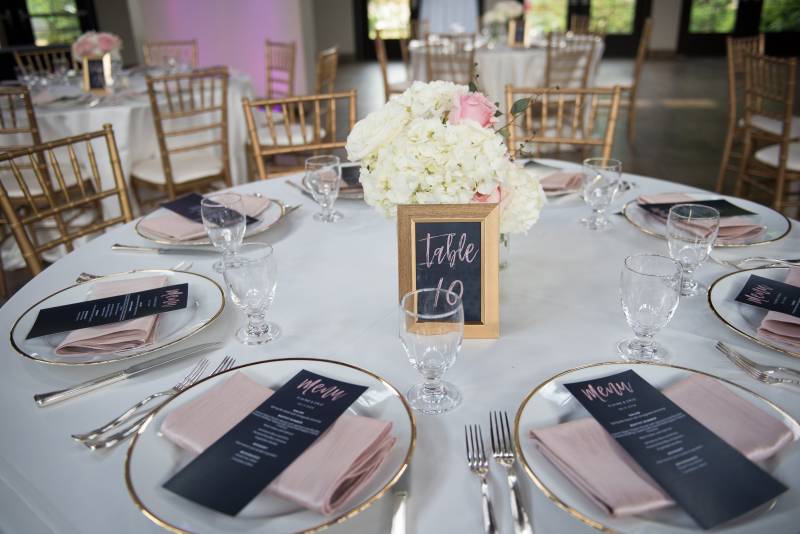 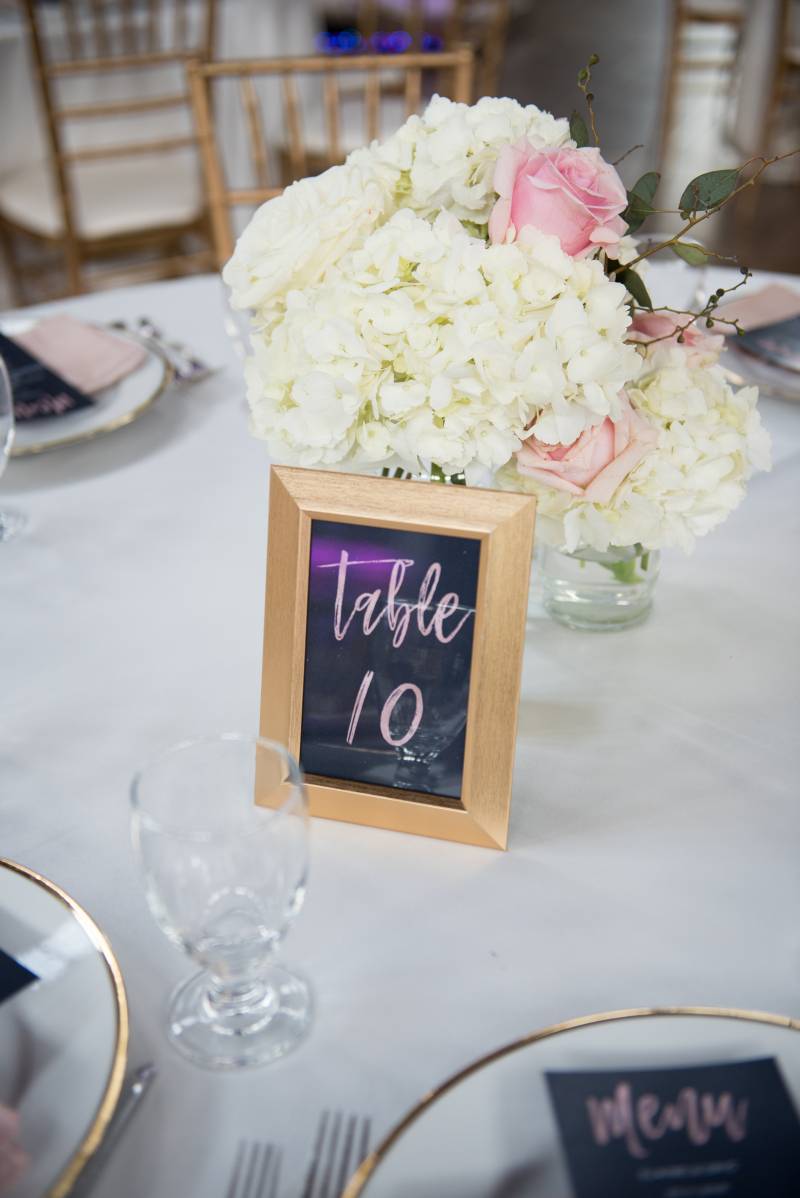 My family is West Indian and several family members from Jamaica and Trinidad came to the wedding. Music has always been a huge part of my family's life. To incorporate that element and pay a nod to my family, the bridal party walked into Bob Marley's "Is This Love?" When Eric and I walked in, the song transitioned to Corinne Bailey Rae's rendition of the same song. While it's a reggae song, the lyrics couldn't be more perfect for us as Bob describes how he realizes he's in love and can't wait to spend all of his life being in love and living with his person.

The bonus of having your wedding at a botanical garden is that God and nature become the best decorators for an outside space. There was no need to add extra flowers for the outdoor ceremony. Opting for a king's table was an easy choice. We never liked how isolated sweetheart tables felt, so we opted for a King's Table for the bridal party. It looked amazing. The rest of the tables were decorated with candles, flowers, navy blue and rose gold menus, and blush pink napkins. Above all else, the food was amazing. The jerk salmon is still being talked about by our guests to this day! 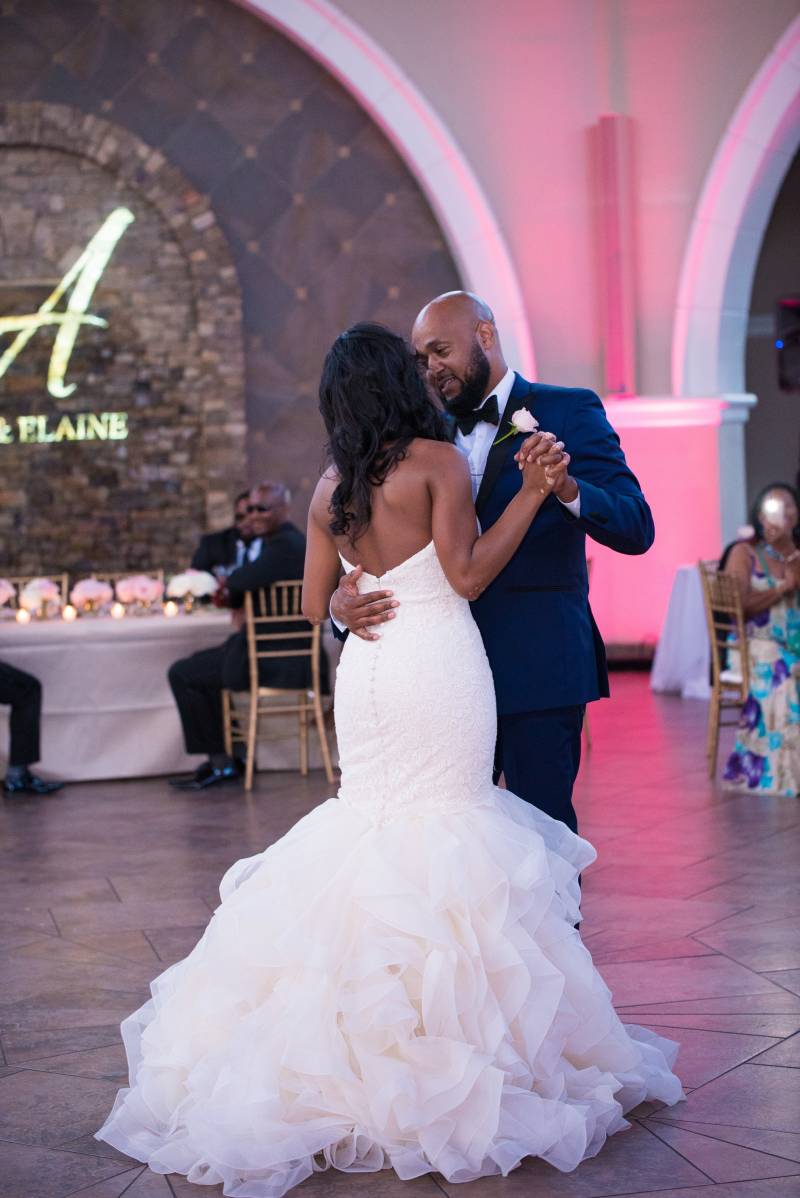 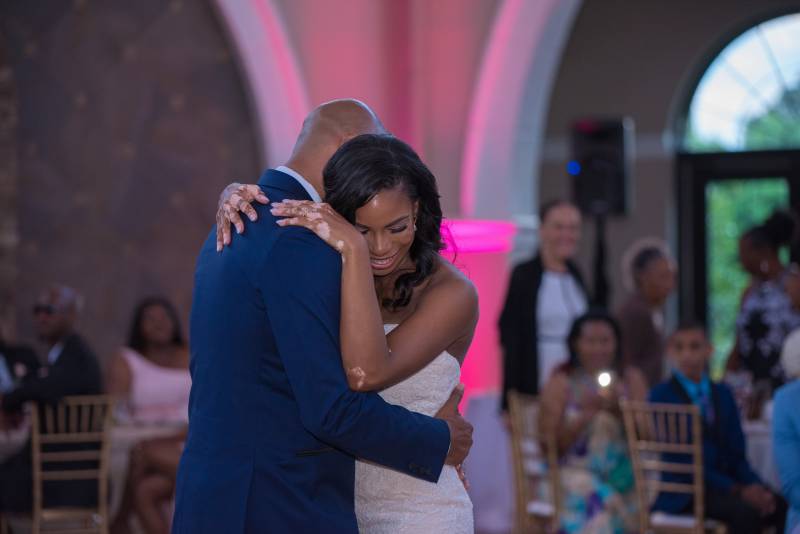 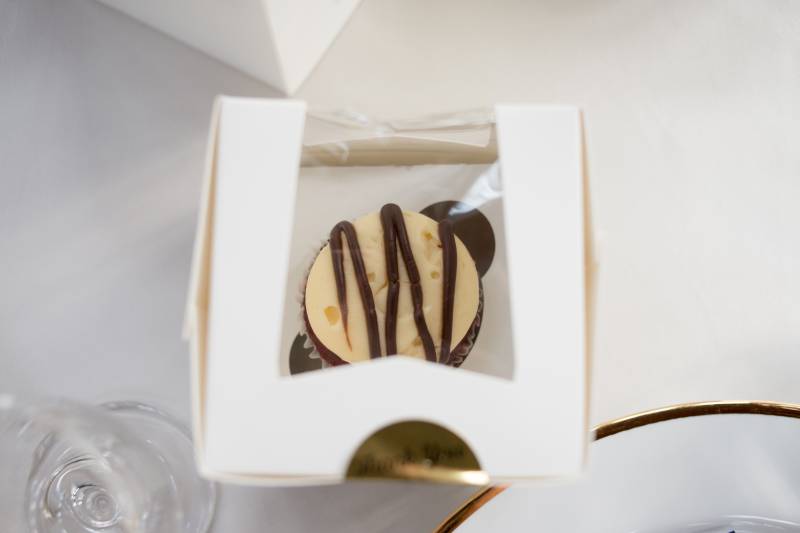 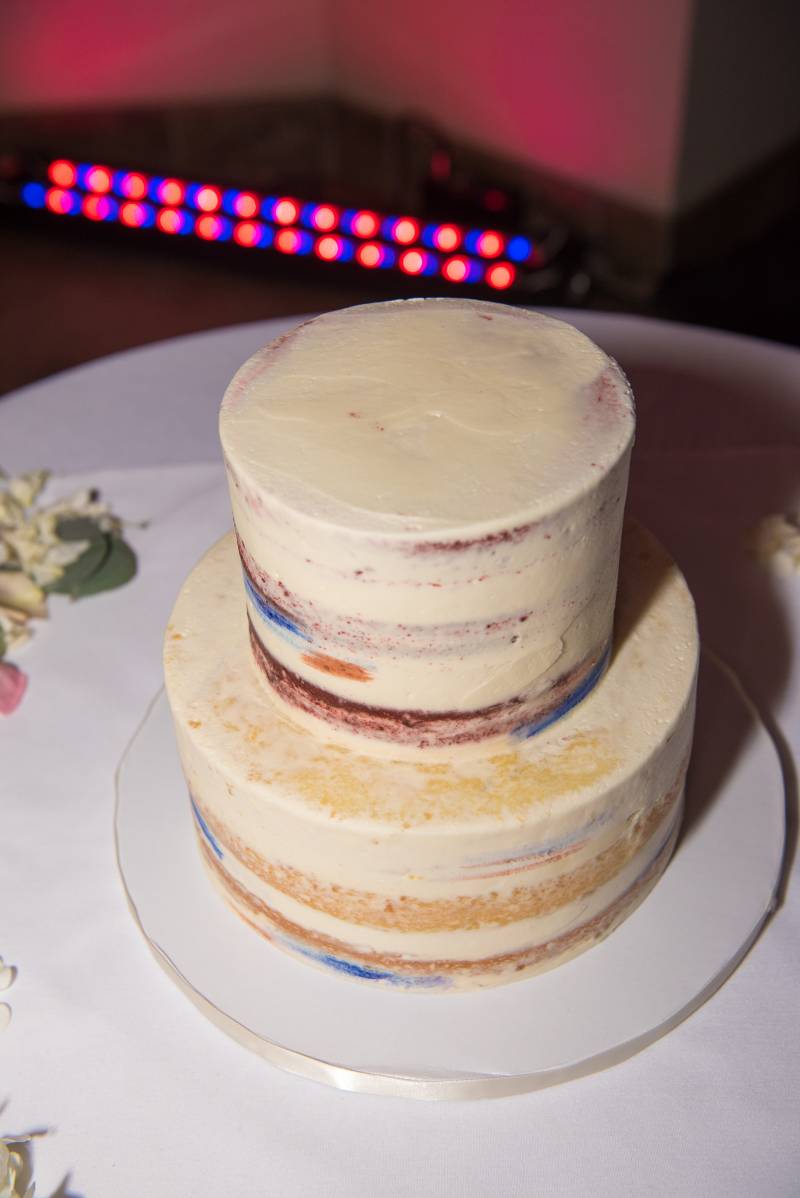 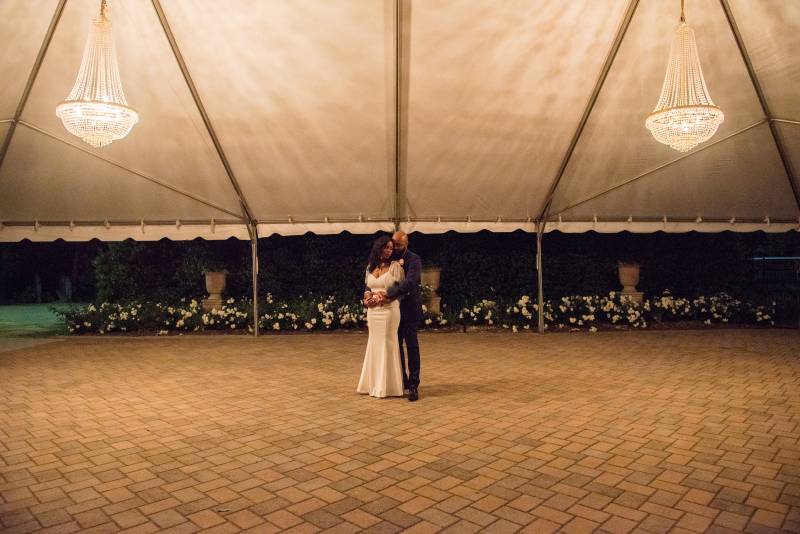 Making new memories together. Every day is something new. We experience, talk, and learn more about each other. Knowing there is someone you can talk to about everything is the best.

Advice for a Bride and Groom on their wedding day:

Be in the moment! If something small doesn't get done, people won't notice. Don't sweat the small stuff and be in the moment because it will all pass fast!

Congratulations to the happy couple! We wish you many years of wedded bliss!

A Rustic Engagement Session at the Art Factory in New Jersey